Passes - Valley of the Waters 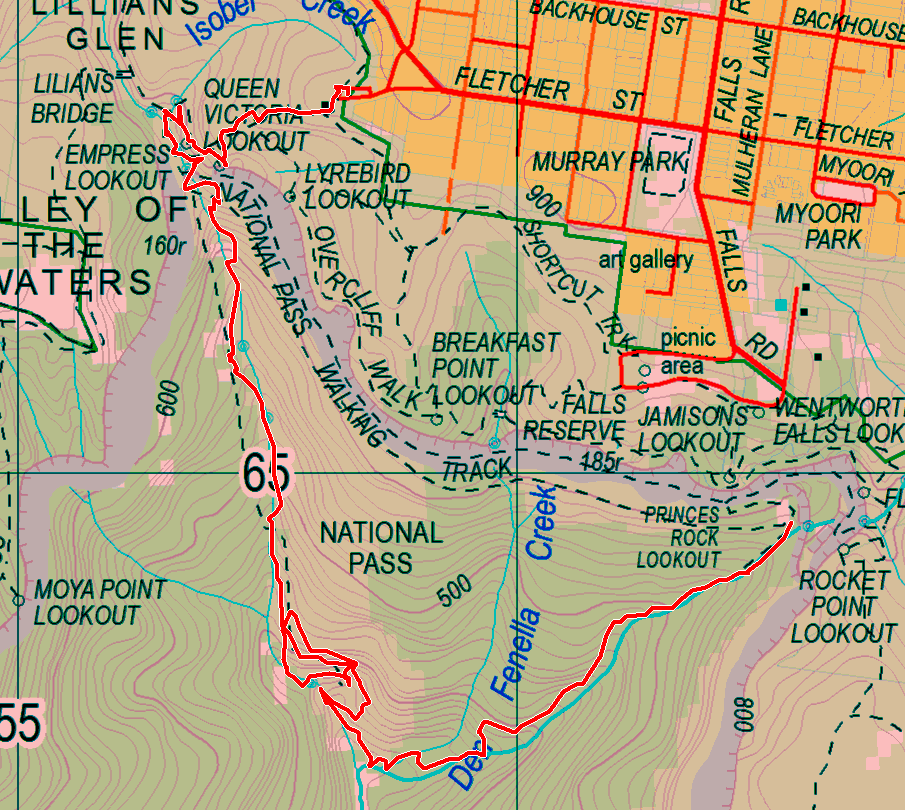 No Access past Empress Falls because of recent rock falls.

In 1884 Capt. James Murray made the first recorded descent into the vlley of the Waters by lowering himself down on a rope. Later as a trustee of the Wentworth Falls Reserve he was instrumental in the development of waling tacks. Lillian's bridge honours his wife Lilla and Brittania Falls is named for his daughter.The first stone staircase above wentworth falls is named Mrs murray's Staircase. Much of the valleys stone work was done by or supervised by Capt. Murray. By 1897 many kms of track had been made and lookouts and shelters built. In 1903 the Vera Falls track was opened followed by National Pass in 1908.

The Valley of the Waters is named for the succession of waterfalls and cascades which the creek flows over in its short 2.5km length.

The track starts at the Conservation Hut in Wentworth Falls. It first descends to the cliff line where there are a few short walks to lookouts which shouldn't be missed (Queen Victoria & Lyrebird lookouts). The track heads west along the cliff line and then descnds into the canyon via a coulple of ladders and ledges. The track is well marked and easy to follow. Care must be taken around the waterfalls as there is limited fencing and the rocks are very slippery.

A number of waterfalls can be seen. In order they are: Empress Falls, Sylvia Falls, Lodore Falls, Brittania Falls, Flat Rock Falls & Vera Falls. After the spectaculare waterfalls at the head of the gorge the creek continues to descend through lush forest and the further you go the more serene and alone you become. A great and beautiful space away from the tourist rush.

Opportunity for large number of walkers, including those with reduced walking ability to walk on well marked and even tracks. Tracks are man made and may have a few steps. Should not be steep. Suitable for beginners. Distance should not exceed about 10km.

Easy walk, mostly on tracks of low gradient. Opportunity to walk easily in natural environments on well marked tracks. Tracks should not be steep. Distance should not exceed about 15km.

Medium walk with some hilly sections and/or rougher terrain. Opportunity to walk on defined and distinct tracks with some steep sections requiring a moderate level of fitness. Suitable for fit beginners. Distance should not exceed about 20 km.

Steeper, rougher terrain and may have off-track sections (no more than one quarter of the walk) or a longer distance track walk. Opportunity to explore and discover relatively undisturbed natural environments mostly along defined and distinct tracks.  Tracks can be steep.   There may be short sections of rock scrambling involved. Leaders should have map reading abilities and/or ability to use a compass. Distance depending on circumstances.  Not suitable for most beginners.

Off-track or difficult terrain. Opportunity for walkers with advanced outdoor knowledge and skills to find their own way along often in distinct tracks or off track in remote locations.  May include steep sections of unmodified surfaces.  There may be rock scrambling, creek walking and crossing involved. Distance should not exceed 30 km, but may be short and difficult.  Not suitable for beginners.

Strenuous off-track walk or very long distance. Opportunity for highly experienced walkers to explore remote and challenging natural areas without reliance on managed tracks. Terrain may be steep, uneven and no track.  There may be rock scrambling, creek walking and crossing involved. Distance covered is unlimited, but may be short and difficult. Only for experienced walkers and not suitable for beginners.

Grades courtesy of John Cooper of The Bush Club

Exposure is assessed on the hardest part of the track / pass

3: OK, but needing some trimming or erosion repairs.

4: A number of sections in poor condition.

5: Overgrown, badly eroded or no track.

Navigation is an overall assessment of the track / pass

2: Easy-Medium. Track is and offshoots are well marked (cairns / tape).

4: Hard. Route finding can be difficult.